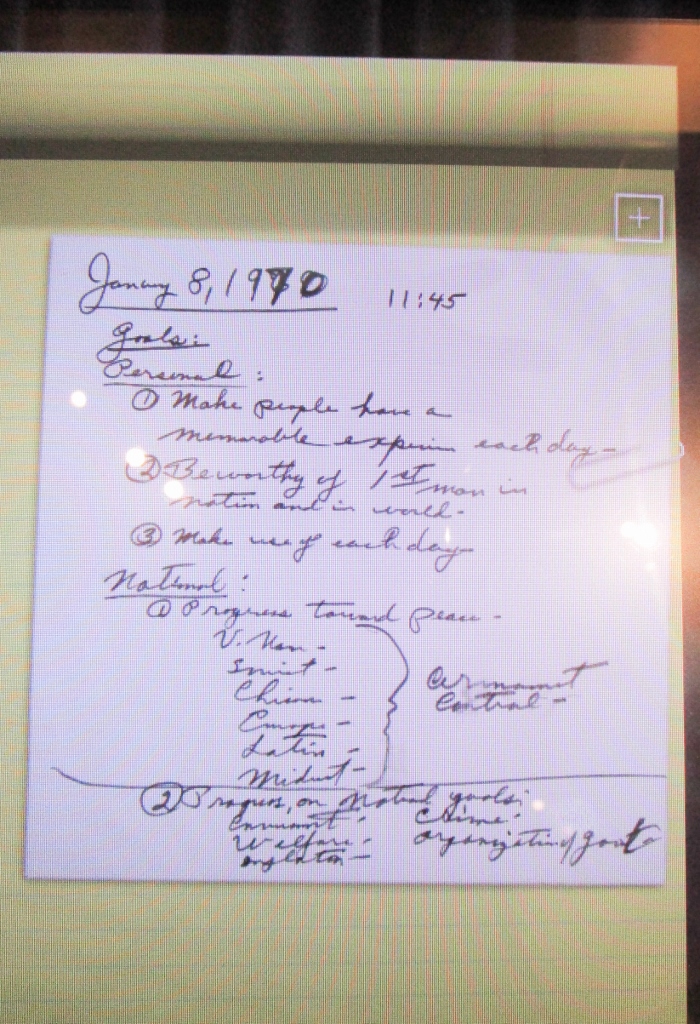 I’m a voyeur when it comes to the brains of accomplished people. So, when I saw Richard Nixon’s famous yellow pads at the Richard Nixon Presidential Library and Museum in Yorba Linda last week, I was thrilled.

Nixon was a lawyer when he entered politics. Naturally, the yellow legal notepad was his tool for making notes. Whenever he needed to draft a speech, structure an argument, or get his thoughts out of his head, he would write it out on a yellow pad.

Nixon left a huge quantity of these pads with the library. Several pages with their transcriptions are displayed in the museum. One of the pages is a single sheet titled “Goals”.

On Thursday, January 8, 1970, Richard Nixon sat down with a yellow pad and wrote his goals for the year. He was almost one year into his presidency. He had committed to ending America’s involvement in the Viet Nam War. At home, the country was facing chronic social and environmental problems.

To our eyes, these goals look like personal themes or affirmations. They are not the SMART goals (Specific, Measurable, Achievable, Relevant, Time-bound) that we are used to seeing and setting today. In fact, SMART goals were still 10 years away. Many believe the concept was first proposed in an article by George T. Doran in 1981.

Nixon’s personal goals are both simple and deeply personal. For these he could be accountable only to himself. He could go over these goals every morning and reflect on them at the end of the day.

After the personal goals, Nixon wrote:

The order of the items reveals what was on his mind. Knowing that Nixon was more interested in foreign affairs than domestic, it’s not surprising to see countries and regions at the top of the list.

Not all of these countries were a problem to the US. Perhaps China is there because Nixon was already planning to make the ground-breaking visit that would change the relationship with that country forever.

Armament Control, on the other hand, was more than an interest. The build-up of arms by countries was an enormous economic problem and safety risk that was threatening the world.

Under “Progress, on National Goals”, we see that environment is first. By 1970, pollution seemed to be at its worst. However, the turning point was just ahead. Later that year, the Environmental Protection Agency would be created and the first Earth Day would be celebrated.

As with Nixon’s personal goals, there are no specific, measurable national goals on the list. The items read like a checklist of focus areas to be worked on and fleshed out. I can image Nixon sitting down with his cabinet and advisors, doing just that.

Nixon used his yellow pad to capture his areas of interest and the concerns on his mind. The structure of the lists—personal, world peace, and domestic— reveal an effort to focus on one area at a time to make sure nothing is missed.

That’s not a bad way to start your list of goals for the year.

Before diving in to making your specific, measurable, achievable, etc. (SMART) goals, why not approach it the way Nixon did:

A start like that could help ensure that your goals will be not only Relevant—the R in SMART goals—but that you won’t miss an important goal.